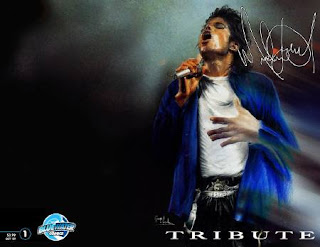 I feel physically ill right now. I just found out that Bluewater Productions is going to do a Michael Jackson biography comic. When are these money hungry jackasses going to get an original thought instead of trying to make money off other people's lives? The "Female Force" line of books is ridiculous to begin with and now we are adding this dreck?

Darren G. Davis can put a spin on it by saying "he initially waffled at producing a tribute comic, but after receiving dozens of emails and phone calls he knew it was the proper way to show respect and give fans a lasting remembrance." I still feel like it is all just posturing in an attempt to make money.

As someone who is familiar with creative types that Davis has worked with in the past, I would hope that the people working on the book are getting paid upfront. I also wonder if Bluewater has done the work with rights and clearances yet? Are the Jacksons going to get paid a pretty penny or is it going to the comic book company?
It was bad enough this morning, finding out that the Jackson family are staking their claim to Michael's questionable estate. On top of that Joseph Jackson was on CNN trying to talk about his new record company while he should have been home with his grandkids instead. Going to the BET Awards and sitting upfront really shows you're in mourning, doesn't it?

You know, maybe the Jacksons and Bluewater deserve each other. Vote with your pocket book, okay?
Posted by Heidi Meeley at 7:55 PM