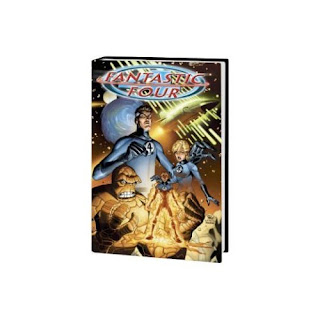 Last week at FCBD, I was lucky enough to pick up the three hardcover trades of the Mark Waid-Mike Wieringo-Karl Kesel+guests run on Fanastic Four. It took me a week, since my schedule is so hectic, but I re-read those three trades and felt something I hadn't felt in awhile reading a book- joy.

Mike Wieringo was born to draw the Fantastic Four. His early death a couple of years ago is one of the industry's greatest losses. I would go so far as to boldly say that his version of the Thing is the best since Kirby. Many artists have aped Wieringo's take on Ben Grimm, and that is a tribute in itself.

Waid's collaboration with Wieringo was one of the best in recent memory. There was an easy flow to the tales being told, and it all looked so flawless. Waid and Wieringo made it look effortless. From the first issue #60 that was sold for 9 cents to comic fans everywhere, to the last issue #524 (damn Marvel and their wacky renumbering), it felt like the Fantastic Four were relevant again.

I can't say enough about the addition of Karl Kesel to this magic machine. His inks compliment Wieringo's work beautifully, and his love of the FF is felt everywhere in the pages. Look far and wide, and it is difficult to find a bigger fan of Sue, Ben, Johnny, and Reed than Kesel. His spiritual and literal touch to the pages was the icing on the cake here. One of my favorite issues of the FF is in fact the annual that Kesel wrote and Stuart Immonen penciled. In it, Franklin and Ben explore what makes a family. It is delightful tale that adds to the beauty of the run.

Waid explored the ugly side of human nature along with the beauty of being a family. I remember him being reticent to tell FF stories until he was gifted with Wieringo and Kesel. With their presence, the book could work. That was a wise decision on Waid's part, as the stories had that extra something special.

Even if you aren't a Fantastic Four fan, this is a run worth reading. There is so much more than a tale being told. The books explore hardship, triumph, loyalty, spirit, magic, love, and family. It just doesn't get better than this.
Posted by Heidi Meeley at 4:28 PM

Thank you so much! That made my day!