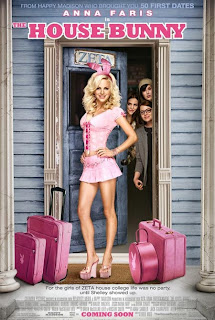 It has been since Wednesday that I made a post here. It has been for no other reason then that I worked insane hours Thursday, Friday, and Saturday and was too tired to do much more then go see a movie last night. I was blessedly lucky to be able to sleep for about 14 hours in a row and wake up feeling human today.

There are a lot of changes going on in my life, with the majority being for the best. It has taken a great deal of determination and drive to keep things in perspective, and I can see that it has affected the regularity with which I have been able to blog. Doing the outside poll was fun, and it made things feel fresher and newer. Now if I can just get a handle on my life in general again, things will be beautiful.

Last night I went to see The House Bunny with a friend. We felt giggly and tired, so we wanted comedy. Boy did we get it! Anna Faris, who stars in the movie as Shelley, is brilliant. Her humor made a role that could have come off as contrived and unappealing into a enjoyable piece of movie going.
Shelley lives at the Playboy mansion, and after she turns 27 she is kicked out. She ends up as house mother of a sorority house, and the effect she has on the sister's lives is long lasting. What worked well here is that the message was not about dressing to please men so much as it was that there needs to be a balance in appearance and intelligence that one can remain true to that holds the key to happiness. I was amazed that it worked out so well.

While this was not the best movie I have ever seen, it certainly did not suck. I liked it enough I would go see it again. The film didn't drag, and Faris was compelling in her role.

On that note, I have to go shopping for new clothes. I have been up and down in size all year because of the stress eating and dieting I have done. I need to have new clothes for Tuesday so that is the first priority.

I hope you are all having a nice weekend. I am very happy to have tomorrow off to spend getting ready for the hectic week that is coming. Take care!
Posted by Heidi Meeley at 2:46 PM