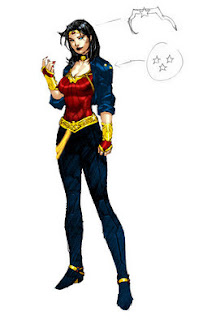 I haven't blogged regularly for quite some time. I have been working a lot and trying to figure out what to do with my life, so it has been very quiet.

Because I have been a fan and longtime Wonder Woman reader, I wanted to give some thoughts. I believe the many dollars I have spent collecting the book from 1974 on and buying back issues that have created a continuous run from 1966 entitle me to this. No internet/comic book lurker am I- you have found the real deal here, Kids.

First off, I am disappointed with the new costume. I am not outraged, because I know it won't last forever. My first impression was that it looked like an old school X-Men costume. My second reaction was that it actually takes away her singular, iconic form and makes her quite ordinary. I am a traditionalist and I won't apologize for it. Her "stars and spangles" costume has always set her apart, and I have never felt that she looks "cheap" or "sexy" in a way that is degrading, other then when past artists have given her the thong look that to me has always been a cop out in general.
J. Michael Straczynski is going to put his stamp on the character as he sees fit in his run. Will it have lasting effects? There is no way to know at this point in time as all we have seen is a preview. I do know that there is a pretty big loophole already in place that will allow the next creative team to bring Diana back to any point in her history. This means that all the outrage that is pouring out right now may be just a moment in time.
Has the new look made her less "revealing"? Not in my mind. She has a bustier and she is wearing lycra/leathery style pants that don't hide anything. All they have done is cover her up with tight clothing and put a jacket on her. It isn't like they put Wonder Woman in a hoop skirt, for Hera's sake. :-)
As a reader, I am not a fan of what I have seen so far. I have already ordered issues 601 and 602 on my DCBS order, so I will have the opportunity to explore further and see if the new creative team can change my mind.
I am not freaking out because I have read comics long enough to know that the only constant in it is change. I am also convinced that DC has done this to make it easier to produce a movie with a more "realistic" edge for non-comic book readers.
Bottom line: I don't like the new look. Taking away the boots and the traditional costume have just made her less extraordinary in my book. I also don't like the fact that she has lost the traditions and rich culture of her upbringing- I always felt it made her unique.
Her new codename should be "Urban Wonder Chick with the X-Men outfit so We can Make a Movie", cuz that is what it all boils down to.
Now I am going to go read my friend's blogs to see what they think. :-)
What is your opinion on the change?
Posted by Heidi Meeley at 5:26 PM

I don't like the new costume, either. And the creators add the indignity of making me feel old as I re-live some 90s fashion moments! (Diana's new costume makes the 90s feel like the distant past, on top of everything else.)

As you say, there is some comfort in knowing that the lazy way they 'pushed' Diana into this changed universe can be reversed in an equally lazy (and easy) way.

What really bugs me is that Diana is now a 'young' hero, which means she can't (ever really) be Superman's equal.

If they're going to update her outfit at least give her something current, not an early 1990's remake of the X-Men cartoons (you hit it on the head with that). Straczynski's story isn't Diana as far as I'm concerned. It's the story of some other woman that he's tossed into the wrapper of WW's comics.

I'm not freaking out about WW. I like the outfit, but it's not a costume and it's far from iconic, which it should be. I don't like the new direction and therefore won't be reading it. I've got plenty to read without it, so it was an easy decision. I want to read about Wonder Woman. The JMS version isn't Wonder Woman because I fail to see the wonder in her.

I liked the way SO put it when he and I talked about the new look. "In the swimsuit, she looks like a superhero who'll kick your @$$. She just looks like she's going to fall out of the new suit."