The first time I saw Wonder Woman, I fell in love. I fell in love with her strength, her kindness, her resolve, and her costume.  Yes her costume. I loved that it looked like the American flag and I loved her long, flowing hair and tiara. I thought she was perfect. 44 years later, I still feel the same way.

To see the current creative team call her trademark outfit "a bathing suit" completely misses the mark. Putting her in leggings and a coat isn't going to make it better, and as past attempts to change her have found, it isn't going to have the same resonance.

I loved Brian Azzarello's take on Wonder Woman. The greek mythology, the savage loyalty, and the confidence Diana displayed every step of the way made me eager to grab each issue. Now with Meredith and David Finch on the book, I just shudder. I hate the way she is portrayed. I reminds me of the 1970's Wonder Woman in part- weepy, overwhelmed, and reliant on the opinions of others. The story doesn't flow well for me- too many things are going on and the plot jumps around until my head hurts. I can't wait for the inevitable creative change.

In the meantime, we are bowing to the so called feminists- being one myself, I find it odd that they would try and pinpoint that. Updating a character to fill a niche does not work. The complete obsession with under sexualizing characters to appeal to the loud few always irritates me. 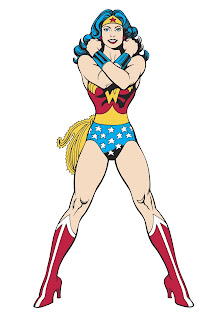 Link to article that set me off:
http://www.newsarama.com/24852-wonder-womwn-writer-on-donna-s-redemption-dumping-bathing-suit-costume.html
Posted by Heidi Meeley at 4:04 PM 4 comments:

My ‪#‎FBF‬ story- back in the day we used to go to the Seattle Comicard Show at Seattle Center. There was a particular show that Joe Staton- one of my favorite artists- was going to be at. It was snowing hard on Snoqualmie Pass and I wanted to turn back a few times, but I was darned if I was going to miss meeting Mr. Staton. We got to the show and went inside. Trembling with excitement, I brought over my well loved copies of All Star Comics and Wonder Woman for Mr. Staton to ...sign. I think he didn't know what to think- he asked me if I had bought the books out of a quarter bin. I honestly can't remember what I said exactly, but I was absolutely thrilled and gushed about how much I loved his renderings of Huntress and Power Girl, and he was very gracious about the whole situation. I had him do this sketch of Huntress, and to this day it remains one of the most treasured pieces in my collection. I miss those days of simple comic book shows, and the opportunity for the one-on-one time that it held. In 2002, comic book shows did not look like they do today!! 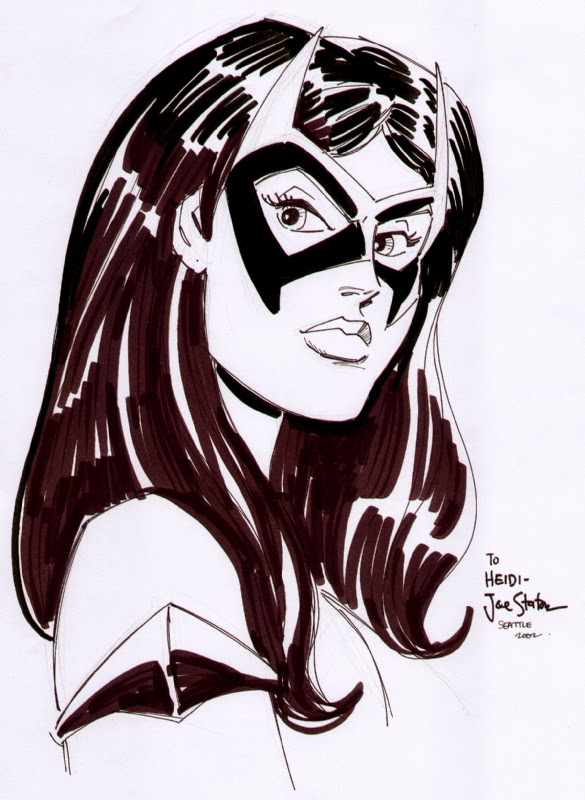 Rising from the Ashes....

It has been four years since I blogged. That is a long time- like 90 years in dog years.

Life has been crazy. End of story.

The comic book industry changed... a lot.... and I lost my passion for the subject.

Recent events have caused me to want to come back. These events include:

The list can go on and on. Needless to say, there is so much that has changed, and not a lot of us old guard have stuck around to comment on it. Bear with me as I get my sea legs again and get back into the issues today.

I know that there is a good chance that no one will read this, but I am okay with that. :)

Posted by Heidi Meeley at 3:59 PM No comments:

So That's Why There Was a Redesign...

When the Wonder Woman comic book series turned 600 and Diana got a new costume, I turned to Jim and told him that it must be because of a movie or television show. He agreed, we both got a giggle, and forgot about it. Yesterday, photos surfaced of actress Adrianne Palicki dressed in the new version with a few twists.

Yet again, the internet goes wild with controversy. LOL.
I am the first to admit that because of my age, I am prone to always think of Lynda Carter as "my" Wonder Woman. That being said, I am going to give the television series a chance. I want to support the character and see where the show goes.
I am not thrilled with how shiny and powder blue colored the pants are, and I am praying her sense of Wonder Gravity keeps her bosom in check. I also want to know where the jacket is. The boots have heels and the top doesn't have the straps that the comic book character has, but otherwise it pretty much looks like Jim Lee's sketch.
Now given validation that my offhand comment about the costume was on the money, I am fascinated to see how much of this series takes cues from the comic book versus using creative license not seen in the printed material.
Much like the rest of the geek world, I will be watching and waiting. :)
(Thanks to EW.com for the picture grab.)
Posted by Heidi Meeley at 12:20 PM 6 comments:

Posted by Heidi Meeley at 12:12 PM No comments:

So awesome! It is a good day today!

Posted by Heidi Meeley at 12:10 PM No comments:

I have officially hit nirvana. LOL

Posted by Heidi Meeley at 3:23 PM No comments:

Posted by Heidi Meeley at 11:41 AM No comments: 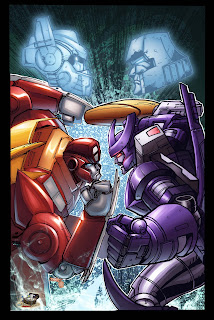 This year's Emerald City Comicon is this weekend- Friday through Sunday, March 4 to 6. For those of you close enough to attend, make sure and head to Seattle and check it out.

Cool gift idea: pick up a copy of this awesome Transformers collectible print for $10 at the Sequential Treasures Comic Art Sales booth. Drawn as a jam piece by Randy "Rantz" Kintz and Ben Hansen, this piece just blows me away. The gorgeous colors by Eddy Swan give it a gorgeous finish that can't be beat.

As a personal highlight, the stars of the Boondock Saints movies will be at the show and there will be a panel in their honor Friday night at 7 p.m.

Head over to the ECCC site and take a look. Lots of good stuff to be had at the best comic book show in the Northwest!!
Posted by Heidi Meeley at 6:56 PM No comments:

THIS IS MY BLOG, DAMMIT!!

I had to get on here to let you know that I am back taking possession of my blog. Many months and thousands of air miles later, I dusted off the blog and took a spin around. I won't be posting daily- God knows that didn't work before- but I wanted to have the occasional say in things and this is the place to do it.

I spend around $20-30 a month on comics so I don't get to read very many titles. I also haven't had a chance to read the news sites, other than finding out that Dwayne McDuffie has passed away and being exremely saddened and dismayed. May he rest in peace.

Since last August I have logged over 40,000 air miles and traveled to several places around the United States. It is interesting how few of those places have comic book shops. My goal is to try and find some shops when I hit the road again in a few weeks.

If I can't afford to spend the money on comics, at least I can talk about trying to find them on the road. LOL.

Now let's see if I can control the spam around here....
Posted by Heidi Meeley at 6:21 PM 4 comments:
Older Posts Home
Subscribe to: Posts (Atom)