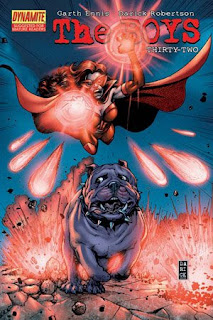 A couple of days I was reading The Boys #31. It was vicious and brutal, with a character taking a permanent dirt nap before the last page unfolded. The impact was swift and meaningful, charging the series with an "anything can happen" vibe.

Why is this? Could it be that creator Garth Ennis has expressed that the series is finite, ending with issue #70?

I think that has a lot to do with it.

In a series like Y The Last Man, Preacher, or 100 Bullets, where there is a limited series mentality, no character is sacred. Anyone can be killed at any time, and the status quo can change without warning.

Characters like Wonder Woman, Superman, Spider-Man, Batman, and even Captain America all suffer from the forever ongoing issue. Creators and Editors can make dictates that shake things up, and often do. There just isn't the same impact allowed though, because through decades of history, these things have been done before. Sure Bruce Wayne is MIA right now, presumed dead in continuity, but how long will that logically last? Last time DC did this, Azrael took over the cowl and grew increasingly nuts until Bruce Wayne stepped back in. This time with Dick Grayson in charge, it could be much longer, but in my gut I know Bruce Wayne will be back.

The closest to a complete reboot I have seen in an "A-list" character is back in the 1980's when DC sent the Wonder Woman of pre-Crisis to Olympus after having her fall in battle. The new (and current) Wonder Woman was completely overhauled. Diana was back on Paradise Island with a few new twists and a complete opportunity for a new lease on life. After 20 years, she still hasn't had a truly steady boyfriend, though she has dabbled. Evidently Wonder Woman's kryptonite is a long term relationship!

Dizzy from 100 Bullets didn't have that hanging over her head. Though she swiftly became one of my favorite characters, and though her series has ended, I felt she was allowed to live without a net in 4 color drama. There were no expectations after all. I didn't grow up with Dizzy, and though I had an attachment to the character, it wasn't the same as how I feel about Wonder Woman- the first female character I learned about and wanted to emulate.

That is a heavy duty responsibility for the comic creators in an ongoing series, especially when said character has been in existence over 60 years. The fanbase gets upset, and it is hard to deal with. Kill a character in a finite series, and we get over it because it is artistic license in a product meant to entertain, rather then entrap.

It feel odd to me knowing that before I would be done with The Boys, most of these characters would be dead. It also felt strange to know that as much as I would like Hughie and Starlight to make it to the end, their relationship will most likely end in heartbreak, unless Ennis takes the Preacher approach and lets them ride off into the sunset, so to speak.

I guess that is why comics are entertainment, right?
Posted by Heidi Meeley at 2:04 PM

Ummmm, you've got #32 pictured and are talking about #31. I read both trying to figure out what happened and ummmm, if you haven't read #32 yet, well, your article bewildered me until I re-read them. I stopped collecting The Boys, but read them from the library collections and at the shop after buying my regular books. I still don't like the savaging of the superhero genre over and over but I do like some of the characters. And seriously, I don't think it holds a candle to Preacher. Preacher is an epic that hasn't been topped yet. I don't see how he can really. My two cents anyway...

I've always thought most comic book titles should have been discontinued once certain plots wrapped up. Just look at what's going on in Green Lantern right now. What could possibly top "Blackest Night" once it's completed? Much as I love GL, I can't help thinking DC should cancel it after "BN" is done -- to keep it from being ruined by later, lame attempts to recapture "BN"! GL will never be this good again.