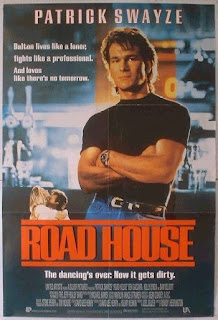 What an awful day in this world. Actor Patrick Swayze has succumbed to pancreatic cancer at the age of 57. He leaves behind a beautiful wife, Lisa, and a legion of fans that span the generations.

Swayze first entered my radar in The Outsiders. In a cast of teen idols, he came off as the paternal one. Good looking and emotional, Swayze looked to have a bright future. Then there was Red Dawn. What a moment in time that was! Anyone have a favorite moment from those two movies?

"No one puts Baby in a corner" was burned into our collective brains in Dirty Dancing. My sister and I couldn't believe how sexy and sensitive he was. Sigh. Not gonna lie about that one now. The movie had it's hokey moments, but it continues to delight audiences.

Then there was Road House. Whew! Playing Dalton, the tough but tender bouncer, this is where I truly learned to love the Swayze. When it comes on television to this day, the hubby and I may stop to watch. This film is one of my favorite old school gems.

I know a lot of folks are fans of Ghost, but I prefer Swayze's macho turn in Point Break. Between Keanu Reeves and him, it was quite a treat for both the ladies and the action fan in general. I absolutely love this movie and I know my husband has a soft spot for it as well.

Rather then going through the rest of his filmography, I would like to take a moment and cheris the Saturday Night Live skit Swayze did with Chris Farley. You know what I am talking about! The Chippendales tryout skit that solidified Farley's comedic genius was also a triumph for our man. It took a lot of guts to let it all hang out and be the straight man to Farley.

I will remember Patrick Swayze as a remarkable dancer, a devoted husband, and a guilty pleasure of sorts. He was one of the good guys, despite a few road bumps along the way. God Speed to you, Mr. Swayze. You have earned your rest.
Posted by Heidi Meeley at 8:16 PM

So, am I the only person who's going to remember Patrick Swayze as Pecos Bill?

Found out about this on holiday whilst peaking at a neighbour's newspaper. I was so surprised, I'd forgotten was ill.
While I don't like dirty dancing, my sister loves it, and so I've seen it many many times and know it very well.
Poor sod. Cancer is a shit way to go.

i watched that chippendales skit - god that man could dance!