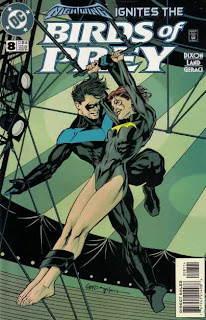 I read over at Newsarama that Birds of Prey, Nightwing, and Robin are being cancelled. The February issues will be the final of each, with issues #127, #153, and #183 respectively.

My first thought is that it has to be due to Batman RIP. My second thought is that DC is imploding again, almost thirty years later. That being said, it is a complete bummer. I do think it is interesting to take note of what Newsarama points out- each series was originally written by Chuck Dixon. Another note is that each book has been wildly popular at one point or another.

In recent memory, there have been some stinker periods on each book. Since Gail Simone left Birds of Prey, it just hasn't been the same. Bruce Jones almost killed Nightwing. I quit reading Robin around the time Identity Crisis hit. I do admit there have been some bad times. I have really enjoyed Nightwing recently and am especially sad to see Birds of Prey end. I love the concept of the book and the execution has been mostly fantastic.

Why do you think the books got cancelled now after such long runs?
Posted by Heidi Meeley at 8:03 PM

Birds of Prey jacked around with people too much after Simone left, they got McKeever on there whose focus was split between BoP and TT, and conversely the quality suffered. By the time Beddard got ahold of BoP, McKeever had kinda run off the Simone fans that had been left. Beddard's current writing on BoP isn't bad by any means either, and I feel this was the most shocking of cancellations as I get the feeling this title isn't coming back.

Nightwing, he wasn't suppose to live after Infinite Crisis and instead of killing him off like Didio wanted to, they kept the character alive and never knew what to do with him. As much as I hated Bruce Jones' arc on there, it was by no means due to a flaw in his dialoguing but rather in his style, which doesn't really sync with huge hero books. Conversely after the Jones debacle DC editorial (I am guessing) tied every other writer down with so many do's and dont's that by the time Wolfman/Nicieza/Tomasi's writing was finished being edited it had been stripped of almost all their original plotting and unique style

Again I am speculating all of this though.

Hmmmmm, welp, I'm stunned it's not more. And at the same time I 'marvel' at all the crap that is out and wonder who the hell is buying it. I don't have money for anything but the basics and must-haves. And also, well, when I lost touch with Batman and have no clue what's going in the book, I sure as hell wasn't going to pick up his wingmen nor BOP after Simone left. And I don't know what the deal is with Chuck Dixon, I've met him several times and he's always been a nice guy, even gave and signed a print of The Iron Ghost after signing a pile of his issues...
Oh dear me, I looked up some info on him and apparently he was upset at gays being in "all ages" books. Gosh, let's gather some stones, shall we? Last I heard, he had a right to freedom of thought and speech. Guess I will have to make sure and buy more of his books now...

Yeah, I don't get what DC is up to with all this. I guess I haven't been into comics long enough to be inured to all the B.S. that comes down the pike. Still, this is just strange.

I don't think it's a sales issue, either. Maybe one of these could have been canceled for sales reasons, but none of them are exactly circling the bowl.

I think DC probably has some coordinated strategy in all this. Fair enough. But the way I see it, DC has screwed enough things up lately that I doubt dismantling the Bat-family and alienating one of its most famous writers will lead to good places.

I hope it's to do with the RIP storyline. I don't wnat BoP to go forever.

incidentally, that Nihgtwing issue, pictured, is one of my favourite Nightwing stories. Good choice.

I'm out of the loop on this, but when I read the headline I was surprised. Guess somebody's cleaning house. Wonder where they're taking Batman.