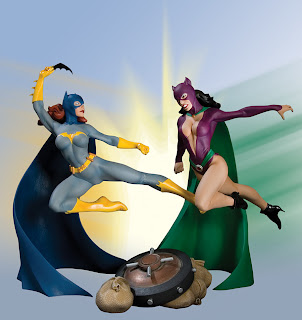 In the DC Previews for February 2009, there is an advance solicitation for a sweet statue of the old school Batgirl versus Catwoman. It is based on the designs of my awesome bud Matt Haley, so that makes it even more tempting.

The problem: I don't have the cash. Bummer!

My only quibble is that Catwoman's top is way more lowcut then I remember it being in the old comic books. Otherwise, I love it. The facial expressions are killer and the sheer poetry of motion is divine. Very cool.

CATWOMAN VS. BATGIRL STATUE
DESIGNED BY MATT HALEY
SCULPTED BY ANDY BERGHOLTZ
Gotham City’s female foes do battle in a CLASSIC CONFRONTATIONS statue!The latest addition to this line of statues sculpted by some of DC Direct’s premier talent features Batgirl confronting Catwoman as the feline fatale attempts to pull a bank heist. In a unique twist, not only does each figure’s cape suspend her in mid-air, but the capes act as bases on which the figures stand. Packaged as three separate pieces (Batgirl, Catwoman and the bank vault over which they are fighting), the statue can be set up in a variety of configurations. The Catwoman Vs. Batgirl Statue is limited-edition, hand-painted and cold-cast in porcelain. It measures approximately 8” high x 11” wide x 5” deep, includes a 4-color Certificate of Authenticity and is packaged in a 4-color box. Manufactured to order.
Advanced-solicited;
on sale July 29, 2009
* Statue * $225 US

What do you think?
Posted by Heidi Meeley at 7:50 PM

"the statue can be set up in a variety of configurations"
That makes it wonderfully genius.
I like it (apart from Selina's costume, but then again, I never liked any style of that costume)

the sense of motion is great, Babs looks wonderful.

I think 225 is waaaayy too much for anything. Then again I's a tight-wad and haven't bought a lot of statues.

Yeah, I agree that there's WAY more cleavage on Selina than there EVER was with that particular costume. She would have been falling out of that dress all over the place. By comparison, I think even Phantom Lady would have had an easier time of keeping HER costume on.