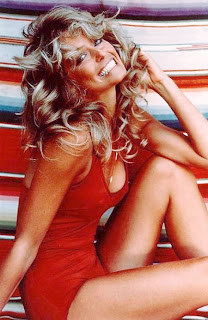 What a strange day in pop culture history. Two of the icons of the last thirty years died today. Farrah Fawcett, the queen of jiggle later turned feminist-actress-icon, finally lost her battle with cancer. "King of Pop" Michael Jackson made his way into the Neverland in the sky, dying of an apparent massive cardiac failure.

And the world hiccupped. Poor Ed McMahon, eternal sidekick and funny man will forever be kicked off the cover of next week's magazines. In better news though, so will the awful, horrendous, and irritating Jon and Kate. That is the silver lining in the cloud that has descended on the world today.

Sure none of these deaths is going to contribute towards world peace... not that I am aware of... but they are losses just the same. I remember watching Charlie's Angels in the 1970's and equating it to Wonder Woman and Police Woman. Though perpetually bra-less, the Angels always kicked butt in the end. To top it off, Farrah was married to the Six Million Dollar Man. How cool was that?

Though in later years, Farrah was riddled with bad press- the Letterman appearance, the Playboy body paint, the troubles with her son, and her tumultous relationship with Ryan O'Neil, she always remained the original Angel to me. I was very sorry to see her struggle with cancer at the end of her life. I can only hope now that she is at peace.

Michael Jackson is a whole 'nother story. As an older type gal, I remember sitting in my cousin Julie's bedroom listening to "Off the Wall" and marveling at the beauty of the album. To this day, whenever I hear the music from that LP, I always get a smile on my face. From that album, he kinda went on and did bigger things ::cough:: Thriller ::cough:: and changed the face of pop music forever.

There will always be the molestation allegations and the amazing level of weirdness that earned Jackson the nickname "Wacko Jacko", but I prefer to remember the incredible level of God-given talent. Sitting in front of my television, watching the Motown Anniversary special, I was on my feet hollering and whooping for Michael and his new fangled "moon walk". It was one of those moments that will always resonate.

What a day this has been. I feel sad and old right now. I feel like I have lost something special from my childhood, and it is a strange and unhappy feeling. There are no tears, but there is pain of loss all the same.
Rest in Peace, my pop culture phenomenons. Know that your place in history is secure, whether it be for fame on infamy.

Is this the performance you were talking about?
http://www.racialicious.com/2009/06/26/open-thread-remembering-michael-jackson/

That is it! Amazing stuff- thank you for sharing! It absolutely is still fresh today, isn't it?