Iron Man DVD- Hard to Get! 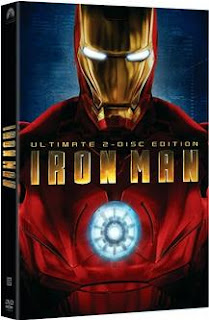 After working a long day, I went to Best Buy to pick up the Iron Man movie Ultimate Edition DVD 2-disc set. Earlier in the day, Jim and I had discussed that we wanted to get that, as it seemed to have decent extras.

I get to Best Buy at a little before 7 p.m. and guess what?

The Ulimate edition is completely sold out. It has been sold out since mid-afternoon. The deluxe edition Iron Man helmet is also sold out. All that is left is a smallish pile of regular edition DVD's. The lady I spoke to said it was crazy how many people came in to get the special edition. they simply hadn't anticipated demand.

Since Borders was close by, I ran by there. I had $5 in Borders rewards to use, so I figured that was the ticket.

Not wanting to tempt fate, and not sure if there would still be a sale price next week, I picked up one of the Ultimate editions that was left and purchased it. Thank God- now I could take it home to Jim, who was pretty excited, much like I was.

How crazy is that? I figured folks would go for the regular edition, but I was wrong.

Did you have any problems picking the 2-disc set up?
Posted by Heidi Meeley at 7:39 PM

Nope. The local Sams Club and Target both had tons of them. Sorry!

Wal-Mart had the Ultimate Edition DVD set kinda randomly placed around it's DVD section. No Deluxe Edition Iron Man Helmets near though.

Glad you did get what you wanted in the end!

No, I made sure I bought mine as soon as Target opened at 8:00 AM. It was right on my way to work, so it worked out well for me. I *love* Target's exclusive Iron-Man helmet/DVD case.

I bought the Target exclusive Iron Man helmet clam-shell Ultimate Ed on the way home. But Wal-Mart had the 2-discer online for more than $2 cheaper plus a Fan-Boy mini-trade. the only drawback - it take 7-10 days to send it to my store (to qualify for the free shipping).

So after much thought, I decided to return the Target one. The clam-shell case looked cool but I wanted to give the mini-trade to the boy to read.

Sea_of_green: I am glad there was lots there- I was hoping it was just me. :-)

Nick, I was wondering about Wal-Mart! Thanks for answering that for me!

Redhead fangirl- thank you! I was very relieved as well!

Mark, good going! I should have gone during my lunch, and I am a bit bummed I didn't. You were smart to do so! :-)

Britt, that was sweet of you to think of your boy! Awww...

You are a good dad!