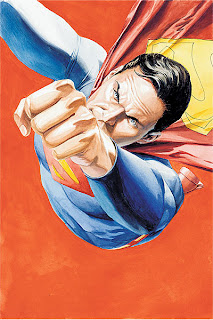 Yesterday we got our DCBS order, and in it was Final Crisis #7. Without giving away any spoilers, I would like to make some general statements.

1. It was indeed a bit of a trippy Grant Morrison affair. The man is unique, and his writing style has a certain sophistication wrapped in a acid trip that no other writer has duplicated. Morrison writes with a confidence that allows no room for conjecture. I never cease to be amazed by this. From The Invisibles to X-Men, the man has no peer in this department. I sometimes question the fact that he has remained so true to the floppy format when I can easily visualize his work in hardback or movie script format.

2. Doug Mahnke made me a believer with his artwork. His style is also unique, and though he was inked by no less than seven inkers, I still appreciated that the man can come through in a crunch. No offense to J.G. Jones, whose work I enjoy, but Mahnke owned it in the end. There is a double page spread towards the middle that ties things together for me.

3. I am glad the whole affair is over. I am burned out on crossovers and big events. I want to find the characters again and focus on their single titles. It irritates me to no end that there is this whole villains month in January that is being followed by an "origins and omens" month at DC. Let the characters get back to their own threads and spend time with their supporting casts, for God's sake!

Those were the three points that were stuck in my head last night. What did you think?

I am off to see Buckcherry, Avenged Sevenfold, Papa Roach, and Saving Abel tomorrow night so I will see you back here Friday! Have a great one!
Posted by Heidi Meeley at 8:19 PM

"I am glad the whole affair is over. I am burned out on crossovers and big events. I want to find the characters again and focus on their single titles."

Have a good time at the concert. I can't believe it but I haven't been to a concert in awhile.

I dropped out after the uber-casual murder of a former beloved character that DC ruined before their death. And I refused to read the rest. My current theory is that DC has been invaded by Marvel double agents bound to destroy the entire DCU. Good job so far I'd say...