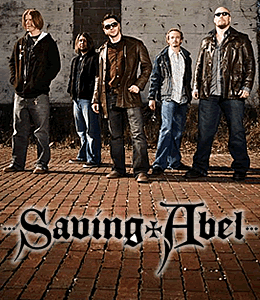 Thursday night I went and saw a concert with four popular rock bands- Saving Abel, Papa Roach, Avenged Sevenfold, and Buckcherry. It was fantastic to have these groups come to our town rather than having to make the sojourn over the mountains to Seattle or Portland. Needless to say, my city was very excited and it showed as the concert was virtually sold out.

I took my friend Kerry and headed over to the Sundome. We actually had awesome "seats" as we were on the floor in the front quarter of the audience. In the new school fashion of concerts, there were no chairs on the floor- just concrete. That made Kerry very nervous, as he had never attended a rock show before. I figured it was going to be okay as I am a solid girl who isn't afraid to shove a bit to keep my place. LOL.

Saving Abel opened the show, and I was very impressed. Their big radio song was "Addicted", but they also had a few good rockers. The lead singer had an incredible voice, and the band played with conviction. I appreciated the crowd to band interaction and Kerry really enjoyed it. We had an excellent view since we were so close to the front. No one moshed during their performance, but there was a lot of jumping up and down. My favorite song was "New Tattoo".

Papa Roach came on next and just killed it. The audience went nuts as lead singer Jacoby Shaddox came into the crowd and sang "Getting Away with Murder". I hadn't seen that kind of fan interaction and symbiosis since taking in a Motley Crue show a decade ago. It was insane, but it was also wonderful. My favorite moment was when the band performed "Forever" and everyone jumped up and down in unison.

The crowd that night was definitely there to see Avenged Sevenfold. When the band hit the state, there was absolute chaos. I moved my friend back a bit so that we were about halfway back on the floor. He didn't want to be in the middle of the moshing, and it was probably a good thing as it got pretty nuts. The lead singer was a bit detached at times, but he really delivered the vocals. Synyter Gates, the lead guitarist, really did a nice job on his three part solo. The entire crowd really vibed when he was in his groove. My favorite song was "Scream".

I felt kinda bad for Buckcherry. The crowd was tired and I noticed folks leaving before they hit the stage. Prior to the concert, they were my main reason for getting tickets. Josh Todd didn't disappoint, doing his Axl Rose moves and keeping the ladies entranced with his lean, tattooed torso. I really enjoyed the performance, but was very upset at the low energy of the crowd. After the band did "Crazy Bitch", people left in droves. I was pissed and embarrassed for my city.

What did I learn at the show? Papa Roach rocks, Saving Abel is a new favorite, Avenged Sevenfold is loud, Josh Todd has a lot of tattoos, and my friend doesn't like to stand for six straight hours! LOL. I really enjoyed myself and wish that more shows like this would come to town. We mostly get country shows, which is all good and well, but I don't go to those. We need to get more rock shows here!

On that note, my tired butt has to get to the gym. I am really back into working out, so bear with me. Since I figured out that my high school reunion is coming up, and since I have felt so out of shape, it is a requirement.

I hope you all have a wonderful rest of the weekend!
Posted by Heidi Meeley at 3:35 PM

Sounds like fun. It seems like it's been ages since I've been to a metal gig where there was space for a proper mosh - not just 15 ppl going nuts.

The Papa Roach I Almost Told You That I Loved You video is in support of their latest single from their “Metamorphosis” album, which was released in March of 2009. According to the band’s singer Jacoby Shaddix, the song was written based on a friend’s experience. He says, “That song was born from a conversation that me and this fella Matt Zane - he’s a musician but he also directs pornography films - and he was telling me about this girl.