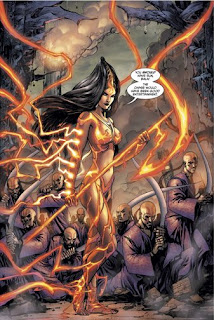 When Virgin Comics first solicited their titles, which included Devi, Snakewoman, and Ramaydan 3392 AD, I was eager to try some new books. I picked up the first two and really enjoyed them, and I had continued to purchase those titles as long as they were solicited. Lately it had come to my attention that Devi and Snakewoman were nowhere to be found in Previews, and that the focus had changed to the "Director's Cut" line of titles.

While this disheartened me, I figured there must be some kind of rebooting or creative team juggling coming. Virgin Comics was funded by THAT Virgin owned by Sir Richard Branson, so there must be tons of money, right?

Word came down that the New York offices were closed and that the staff there were laid off. There are plans for a Los Angeles office to open in the future. This appears to mean that there will be no new titles coming out in the United States. What this means longterm, with the announcement at San Diego that Stan Lee was jumping on board, it anyone's guess.

Part of me if relieved, because it is less money I will be spending on books. The other part of me is pissed, because I got emotionally invested in characters that won't be back. What do you think? Were you buying any Virgin titles?
Posted by Heidi Meeley at 7:32 PM

Part of the reason didn't jump on with virgin... I just was worried their titles would get cancelled

cynical on my part but oh well

Part of the reason didn't jump on with virgin... I just was worried their titles would get cancelled

cynical on my part but oh well

It's sort of a catch-22 with comic readers anymore, isn't it? They won't pick up a series until it proves itself, but it can't prove itself if no one picks it up.

Almost makes me glad I DIDN'T start my own comic shop.

Publishers come and go. As a comic book retailer you see them, and if they look interesting order a few, but don't go crazy. It's that simple. At Neptune Comics we order no more than 2 copies above the pull/hold. After 2 months we dropped most of the line due to lack of interest.

Take Red 5 another new start up publisher. We really liked what Atomic Robo was looking like so we went with 5. Customers started reading about it, on-line and every where we sold out pretty quick and re-ordered. Atomic Robo is there strongest title here at our store, the others are not so strong, but we give them a try.