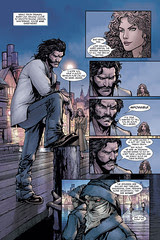 Devi #3 page 4
Originally uploaded by Heidi Meeley.
From the first page summary of the Indian mythology of Devi, my attention was captured. The simplicity of the brief summation immediately endeared me to writers Siddharth Kotian and Samit Basu. The characters are incredible, and the action perfectly paced. I also appreciate the art by Mukesh Singh, along with the gorgeous colors of Nanjan J. The production value is amazing, and the book itself has great depth.

Before I gush too much, let me give a brief back story. In the second century of mankind’s arrival on Earth, there is a great war in which the Gods of Light must fight one of their own. The dark god Bala feeds off the forced worship of men, and his power is so great that the Gods cannot win the battle. They each put a portion of their power into a powerful hero named Devi.

The first issue of Devi opens with said warrior woman leading the Gods and their troops into a final battle. Devi is a sure witted warrior, whose battle skills are second to none. Ensconced in a glorious light, she is merciless in her goal to eradicate Bala forever. Perfectly paced, the final fight is shown to glorious effect. In modern times, we are also introduced to nemesis and contract killer Kratha.

Issue two takes readers into the modern day with alcoholic cop Inspector Rahul Singh. A brave man, used to dealing with the bizarre, Rahul has a careworn, jaded appearance. An ace cop with a mysterious past and a complex personality, Rahul’s back story is something I am very interested in finding out about.

In this issue we find out more about Kratha and the people paying her. We also meet the modern day Devi, even though she isn’t aware of yet herself. Tara is a beautiful young lady who knows that there is more to life then her current grind of clubbing at her boyfriend’s establishment. We are also introduced to the secret element of Devi, as the Durapaysa tip their hand.

Issue three brings more mystery into the book with the complexity of the characters starting to show through. Nothing is what it seems, and time is of the essence. Watching Tara’s soul journey makes the reader feel as if they are there with her. As the other characters gather to make their presence known, the danger is at an all time high.

I love the fact that I didn’t feel lost as I read the first three issues of Devi. I felt like the book has been well paced, and that the writing is on point. The dialogue drives the story, and never feels forced. I was further impressed that the third issue was written by Samit Basu rather then Kotian but that I didn’t get lost by different styles. The cohesiveness of the story being told is intact, which really impressed me.

Order a copy of Shekhar Kapur’s Devi from your local comic book shop or online. Give new talent and a new company support so that we can continue to see high quality work like this being created. It might not be American-made, but it still very worthy of our support. A comic being produced in a timely fashion by true professionals is where I want to throw my support.
Posted by Heidi Meeley at 6:24 PM

Awesome post, the story behind this heroe is quite interesting.